Shaving through the ages 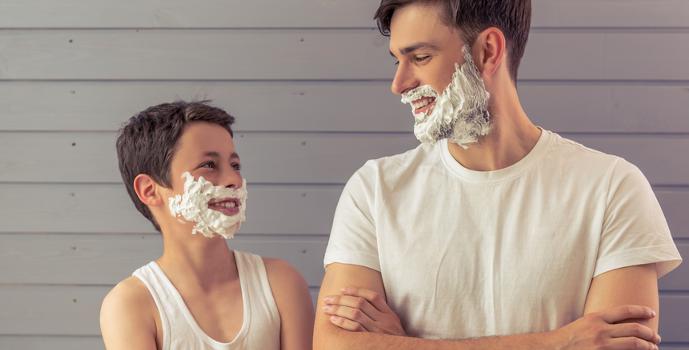 If you think men’s struggle to remove facial hair is a modern one, we’ve got news for you. There’s archeological evidence that, in the Late Stone Age, men shaved with flint, obsidian, or clamshell shards, or even used clamshells like tweezers. (Ouch.)
Later on, men experimented with bronze, copper and iron razors. The wealthy might have had a personal barber on staff, while the rest of us would have visited the barber’s shop. And, starting in the Middle Ages, you might also have visited the barber if you needed surgery, bloodletting, or any teeth extracted. (Two birds, one stone.)

In more recent times, men used the steel straight razor, also called the “cut-throat” because…well, the obvious. Its knife-like design meant it had to be sharpened with a honing stone or leather strop, and required considerable skill (not to mention laser-like focus) to use.

WHY DID WE START SHAVING IN THE FIRST PLACE?
For lots of reasons, it turns out. Ancient Egyptians shaved their beards and heads, possibly because of the heat and probably as a way to keep lice at bay. While it was considered uncouth to grow facial hair, the pharaohs (even some female ones) wore false beards in imitation of the god Osiris.

Shaving was later adopted by the Greeks during the reign of Alexander the Great. The practice was widely encouraged as a defensive measure for soldiers, preventing the enemy from grabbing their beards in hand-to-hand combat.

FASHION STATEMENT OR FAUX PAS?
Men have had a love-hate relationship with facial hair since the beginning of time. Through the years, beards have been seen as unkempt, handsome, a religious necessity, a sign of strength and virility, downright dirty, or a political statement.

Until Alexander the Great, the Ancient Greeks cut their beards only in times of mourning. On the other hand, young Roman men circa 300 BC had a “first-shave” party to celebrate their impending adulthood, and only grew their beards while in mourning.

Around the time of Julius Caesar, Roman men imitated him by plucking out their beards, and then Hadrian, Roman Emperor from 117 to 138, brought the beard back into style.

The first 15 U.S. presidents were beardless (though John Quincy Adams and Martin Van Buren sported some impressive muttonchops.) Then Abraham Lincoln, owner of the most famous beard of all time, was elected. He started a new trend—most presidents who followed him had facial hair, up until Woodrow Wilson in 1913. And since then, all of our presidents have been clean-shaven. And why not? Shaving has come a long way.